Marwari Jokes: A Lion and a Jackal

Story about worth of life

Story of worth of a life.

A little boy went to his old grandpa and asked, "What's the value of life?"

The grandpa gave him one stone and said, "Find out the value of this stone, but don't sell it."

The boy took the stone to an Orange Seller and asked him what its cost would be.

The Orange Seller saw the shiny stone and said, "You can take 12 oranges and give me the stone."

The boy apologized and said that the grandpa has asked him not to sell it.

He went ahead and found a vegetable seller.

"What could be the value of this stone?" he asked the vegetable seller.

The seller saw the shiny stone and said, "Take one sack of potatoes and give me the stone."

The boy again apologized and said he can't sell it.

Further ahead, he went into a jewellery shop and asked the value of the stone.

The jeweler saw the stone under a lens and said, "I'll give you 1 million for this stone."

When the boy shook his head, the jeweler said, "Alright, alright, take 2 24karat gold necklaces, but give me the stone."

The boy explained that he can't sell the stone.

Further ahead, the boy saw a precious stone's shop and asked the seller the value of this stone.

When the precious stone's seller saw the big ruby, he lay down a red cloth and put the ruby on it.

Then he walked in circles around the ruby and bent down and touched his head in front of the ruby. "From where did you bring this priceless ruby from?" he asked.

"Even if I sell the whole world, and my life, I won't
be able to purchase this priceless stone."

Stunned and confused, the boy returned to the grandpa and told him what had happened.

"Now tell me what is the value of life, grandpa?"

"The answers you got from the Orange Seller, the Vegetable Seller, the Jeweler & the Precious Stone's Seller explain the value of our life...

You may be a precious stone, even priceless, but, people will value you based on their financial status, their level of information, their belief in you, their motive behind entertaining you, their ambition, and their risk taking ability.
True worth of life will be found by right person only and by your enlightened consciousness

*everyone is Unique, Original and the only one of ur kind.

One day, A taxi passenger touched driver on his shoulder to ask something. Driver SCREAMED, lost control of car, went up on footpath & stopped few inches from a shop. Passenger apologized & said: "I didn't realize that a little touch would scare u so much" Driver replied: Sorry it's not u r fault, it's my 1st day as a cab driver, I've been driving a van carrying dead bodies from last 25 years.😜😂

Brilliant Puns:
1. A man who wants a pretty nurse, must be patient.
2. A man who leaps off a cliff, jumps to a conclusion.
3. A man running in front of a car, gets tyred;
And a man running behind a car, gets exhausted.
4. War does not determine who is right. It determines who is left.
5. A man who drives like hell, is bound to get there.
6. A lion will not cheat on his wife, but a Tiger wood!
7. Toilets are a great place to think.No wonder they are called "Sochalayas"..

You are not a Monk

A man is driving down the road and breaks down near a monastery.

He goes to the monastery, knocks on the door, and says, My car broke down.
Do you think I could stay the night?

the monks graciously accept him, feed him dinner, even fix his car🔧.

As the man tries to fall asleep, he hears a strange sound💬.

The next morning, he asks the monks what the sound was, but they say,

We can't tell you. You're not a monk.

The man is disappointed but thanks them anyway and goes about his merry way.

The same man breaks down in front of the same monastery.

The monks again accept him, feed him, even fix his car🔧.

That night, he hears the same strange noise 💬that he had heard years earlier.

The next morning🌞, he asks what it is, but the monks reply, We can't tell you😶. You're not a monk.

The man says, All right, all right. I'm dying to know.

The monks reply, You must travel the earth 🌍and tell us how many blades of grass there are and the exact number of sand pebbles When you find these numbers,

you will become a monk.

The man sets about his task.

Some 4⃣5⃣ years later, he returns and knocks on the door of the monastery.

I have traveled the earth🌍 and have found what you have asked for. There are

The monks reply, Congratulations. You are now a monk😇.

We shall now show you the way to the sound.

The monks lead the man to a wooden door🚪 where the head monk says,

The sound is right behind that door.

The man reaches for the knob, but the door is locked.

He says, Real funny. May I have the key?

The monks give him the key, and he opens the door.

Behind the wooden door is another door made of stone🚪.

The man demands the key to the stone door.

The monks give him the key, and he opens it, only to find a door 🚪made of ruby.

He demands another key from the monks, who provide it.

Behind that door is another door🚪, this one made of sapphire,

So it went until the man had gone through doors of emerald,

Finally, the monks say, This is the last key to the last door.

The man is relieved to know end.

He unlocks the door,

Chintu's deal with the Professor

Chintu failed in the final Law Exam & decided to make a deal with the Professor.

Chintu: Sir, Can I ask you one question?

Chintu: If you can answer this question, I will accept my final marks, if you cant, you will have to give me an "A" grading.

Chintu asked: "What is legal but not logical, logical but not legal & neither legal nor logical?"

Prof thought about it for hrs & pondered but couldnt think of an answer.

He had to finally give up as he really didnot know the answer.

He gave this boy an "A" grading as promised.

The following day, Professor asked same question to his students.

He was shocked when all of them raised their hands.

He asked one student.

Your wife, is having an affair with a 23 year old boy, this is logical but not legal.

Your wife's boyfriend has failed in his exam & yet you have given him an "A", this is neither logical nor legal. 😎

Evolution and improvement of English Language

The European Commission has just announced an agreement whereby English will be the official language of the European Union rather than German, which was the other possibility.
As part of the negotiations, the British Government conceded that English spelling had some room for improvement and has accepted a 5- year phase-in plan that would become known as "Euro-English".
In the first year, "s" will replace the soft "c". Sertainly, this will make the sivil servants jump with joy. The hard "c" will be dropped in favour of "k". This should klear up konfusion, and keyboards kan have one less letter.
There will be growing publik enthusiasm in the sekond year when the troublesome "ph" will be replaced with "f". This will make words like fotograf 20% shorter.
In the 3rd year, publik akseptanse of the new spelling kan be expekted to reach the stage where more komplikated changes are possible.
Governments will enkourage the removal of double letters which have always ben a deterent to akurate speling.
Also, al wil agre that the horibl mes of the silent "e" in the languag is disgrasful and it should go away.
By the 4th yer people wil be reseptiv to steps such as replasing "th" with "z" and "w" with "v".
During ze fifz yer, ze unesesary "o" kan be dropd from vords kontaining "ou" and after ziz fifz yer, ve vil hav a reil sensi bl riten styl.
Zer vil be no mor trubl or difikultis and evrivun vil find it ezi TU understand ech oza. Ze drem of a united urop vil finali kum tru.
Und efter ze fifz yer, ve vil al be speking German like zey vunted in ze forst plas.
If zis mad you smil, pleas pas on to oza pepl.

Love Story in UP 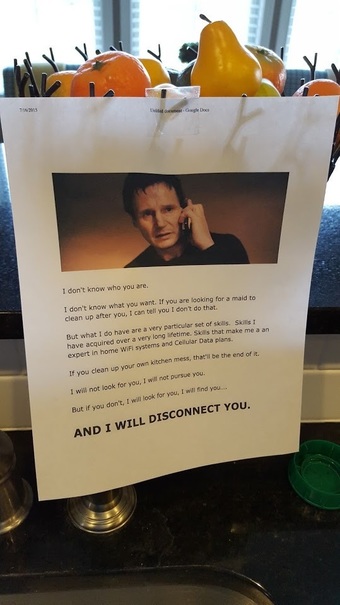 A perfect note by a Father for his messy kids

A father fed up with his sloppy kids and doesn't want to wipe dishes... So he made a cool note, inspired from the movie Taken, and put it on the refrigerator, threatening them to remove wifi and disconnect their internet connection. 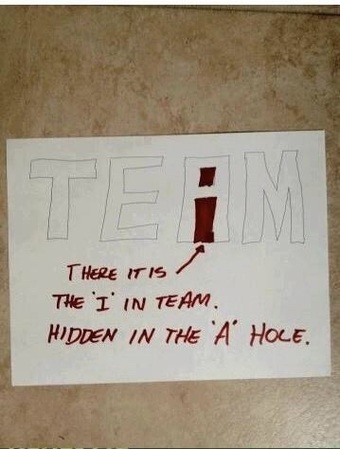 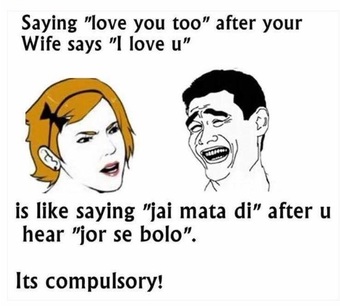 Saying "I love you too" after your Wife says "I love you"
.
.
is like saying "Jai mata di" after you hear "jor se bolo".

The Right way to answer True or False question? 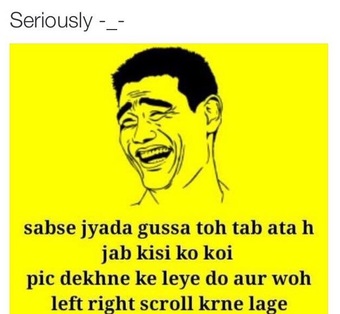 Husband - Wife... who trolls who? end of story will bring you to tears

A woman went shopping, At cash counter she opened her purse to pay. The cashier noticed a TV remote in her purse. He cud'nt control his curiosity n asked "Do u always carry ur TV remote with u?" She replied " No, not always, but my husband refused to accompany me for shopping today.. ..............
MORAL : Accompany ur wife....
😡
😝
😄
😄

The story continues....
The shopkeeper laughs and takes back all the items that lady had purchased.
Shocked at this act, she asks the shopkeeper what is he doing. He said your husband has blocked your credit card..........
MORAL : Respect the hobbies of your husband.
😝
😆
😁
👌

Story continues....
Wife took out her husbands credit card from purse and swiped. Unfortunately he didn't block his own card.
MORAL: Don't underestimate the power of a WIFE.
👩
😎
😁
😝
😂

Still continues...
After swiping, the machine indicated 'ENTER OTP SENT TO YOUR MOBILE'.
MORAL: When Man tends to lose, machine is smart enough to save him!
😀
😜
👨
👍

Still continues....
When she turned back with depression, her mobile ringed showing forwarded SMS "your OTP is......"Finally she bought her items & returned home happily
MORAL: what are you thinking about Men! He always sacrifices himself for his wife
😃
😇
👼
👍

Ex gf: How are you doing these days... (BLOCKED Jokes)

Ex girlfriend : hi how r u doing these days? 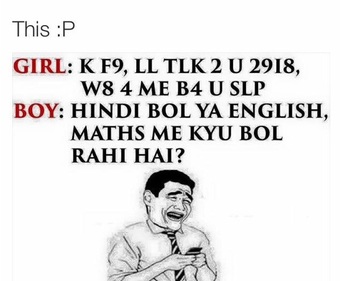 A drunkard's visit to doctor 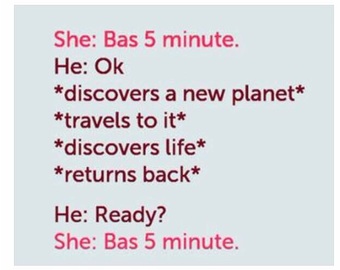 Girl buying gift for her boyfriend

How girls buy gift for their bfs

Gully cricket rules we have all played 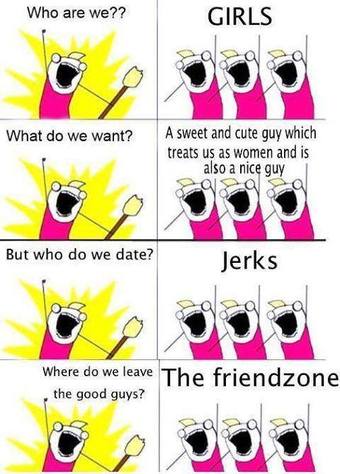 This meme is about Girls' dating logic, sadly a true story!
But "A heart wants what it wants". Listening to brain might be a good thing once in a while.
So, It's recommended for the nice guys to share this meme ;) 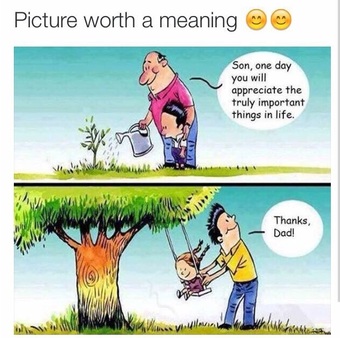